Print City was a Print Festival Scotland project for Dundee Design Festival 2017 at West Ward Works. Print City became a monumental, immersive installation built from hundreds of large-scale, hand-printed cardboard building blocks that came together to form an abstract cityscape. Covering a factory floor that once housed huge printing presses,  Print City captured Dundee’s history and heritage with printmaking and the imagination of the public of Dundee.

Well that’s the end of this years Dundee Design Festival and the end of this first incarnation of Print City. It has been a wonderful experience working with everyone from the festival,  the organisers, install crew, festival volunteers and all the team from Dundee Contemporary Arts….. Thank You!

We’ve been working on site at West Ward Works for over two weeks, which has turned into an unforgettable experience for everyone involved. It all started with a delivery of two hundred sheets of Tri-Wall cardboard, which had to be unloaded from the truck by hand to the factory floor. From then on in it’s been a huge team effort by a group of talented and dedicated group of individuals who have volunteered their time to print and construct Print City. Without their hard work and help this project would not have happened. From the Print Festival Scotland team we’d like to thank our print team and install crew

We would also like to thank all those who have contributed to the project and volunteered their time, skills and imagination in the development of this work. These include:
The install crew – Henri Meadows, Adrian Murray, Andy Rice and John Silvera.
The print volunteers, Fraser Brownlee, Sarah Burt, Natasha Dijkhoff, Rossi Hadzhieva, Tiernan Haugh, Amy Jones, Russell Macaulay, Jo Milne, Katherine Murphy, Nkem Okwechime, Thomas Sanches, Jamie Steedman, Anna Tararovaand Sherry Trimon. 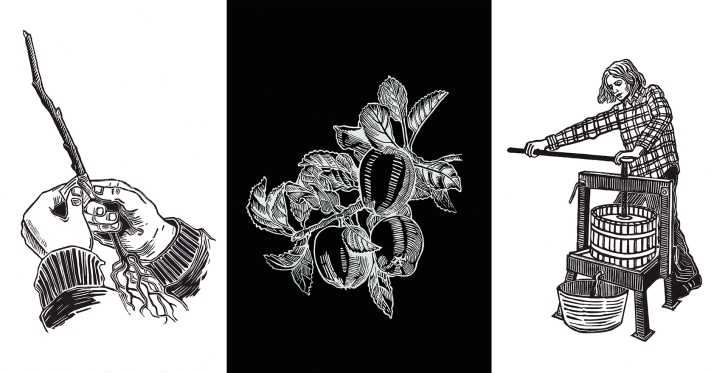 We are glad to announce another intervention project intergating with Print City.

Dundee Urban Orchard is a socially engaged art project that reimagines Dundee as an Orchard City. Since 2013 DUO have planted 25 small-scale orchards across the city, working with hundreds of active citizens to do so.

For Print City, DUO will be grafting a series of 25 relief prints onto the existing Print City installation. The prints depict images of planting, pruning, harvesting and other forms of orchard celebration.

Currently West Ward Works is a hive of activity. We’ve been in the building for almost two weeks now and we have days and days of printing and construction to go! It has been wonderful watching our part of the factory floor fill up with a surreal landscape of card and ink. We cant wait for you to see it over the coming next few days.

As part of our programme we are welcoming other artists with interventional projects that intergrate in with or around Print City. Montreal artist Guillaume Brisson-Darveau has been working alongside our team this week at West Ward Works on his beautiful sculpture ‘Le Portail’ (The Portal), which when you walk through it, takes you into the Print City. There will be other intervention projects taking place but we don’t want give too much away for now.

From May 24 Print City will be open to the public. We hope the immersive nature of the project inspires individuals to be creative in with the city space. Come along and draw, photograph or contemplate your ideas in Print City.

We don’t want to give too much away but these images will give you a taste and feel of what Print City will look like when completed. Already the space is evolving after just one day of testing building designs. The patterns camouflage, interupt as well as compliment one another, changing as the day light moves across the space. Next week we’ll start to lay out the floor plan for the city, creating avenues for exploration and spaces to be investigated.

And finally we get to start to print! Our first week on site at West Ward Works has got off to a flying start. We’re very fortunate to have a great team of folk who are volunteering their time everyday to help screenprint quite literally hundreds and hundreds of the card shapes needed for construction. Thats forteeen images been printed so far, layered and printed over each other in black and white ink which is creating rich and interesting patterns across the surfaces. We’ll be introducing another set of screens this week, printing right up to and through the duration of the festival.

After a period of research, the selected print materials including purpose built screens and 200 sheets of 2m x 3m Tri Wall cardboard begin to arrive on site. The first floor warehouse space is cleared and a production area set up whilst the plumbers make water available for the ‘wash out’ area. Designs that have been developed over recent weeks from the outcomes of the public drawing workshops (combined with archival images from D.C. Thompsons and photographs of Dundee) are output to film and exposed on to the screens.

A series of open access workshops held in the Visual Research Centre (VRC), Centrespace, at DCA invites you to visualise your personal experience of the city through drawing and model making. These images will be scanned/photographed, enlarged and used as the basis for the printed designs that will populate the final large scale installation.

Print Festival Scotland invites you to participate in the design and production of a printed city at the former DC Thomson print works at West Ward in May, as part of Dundee Design Festival 2017. Dundee has a rich history and a vibrant contemporary culture in Print and Printmaking that will be celebrated in this project – as we explore collectively the relationship between the City and Print.